I have learned that you have to work for what you want and the harder you work, the more satisfaction you will receive.

Don was raised by his grandparents, Tracy and John Gross, on their farm in Adel, Iowa. He attended and graduated from Adel High School where he ran track and wrestled. Don was also a Golden Gloves boxer for three years during his high school years.

Don started a career in the fire service with York Fire Department then moved to Lincoln Fire and Rescue for his last 33 years of service. Don moved quickly through the ranks from Firefighter, to Fire Apparatus Operator, then promoted as a Fire Investigator where he was a member of the bomb squad. Don loved being a public servant and helping people. He enjoyed being interviewed by the local media and always offered help to his co-workers and citizens who had difficult questions.

Don not only served the citizens and visitors of Lincoln, Nebraska, he served his country. He enlisted in the United States Army National Guard and started at the ranks of an enlisted soldier and continued his desire to keep pushing himself to higher education, first earning an Associate’s degree followed by a Bachelor’s degree. He made the ranks of Sergeant, Warrant Officer 3, 2nd Lieutenant, 1st Lieutenant, Captain, and retired as a Major. Through his accomplishments he achieved many awards and service ribbons for his service. Some of these military accolades and flying ratings include not only one, but five different U.S military helicopters, including the Bell TH-67, Cobra AH-1, Huey UH-1, Blackhawk UH-60, and Bell OH-58. Don deployed to Mexico, Kosovo, Iraq, Somalia, and other places the family will never know.

Don was a true hero to his family and to those who got to personally know him. He is survived by his wife, Allison, four step-sons, Gavin, Jude, Taber and Zane, and daughter, Taylor Renee Gross; and sisters, Leslie Walker and Lisa Gross. He loved them more than himself. He loved his two cats, Bandit and Monster, along with his step-dog, Gunney Hurd. He was always very kind, humble, and soft spoken which demanded the attention of any audience. But then, unexpectedly, he’d add some quirky comments or jokes to a conversation to make everyone laugh.

Don’s unfortunate and untimely departure from this life happened as a result of being on call/duty from home as a Fire Investigator. After responding to several incidents over the weekend, he simply went to sleep on the couch, watching Yellowstone, Gunney (his silver lab) at his side. Don will forever rest in peace.

Don will be cremated and his ashes placed where his family desires. The family would like to thank all those that have called, texted, and stopped by the house, offering support as they work through the tragic loss of a great human being. They would also like to thank the citizens of Lincoln, Lincoln Fire and Rescue, Lincoln Police Department, Lancaster County Sheriffs Department, and Local #644 Firefighters Union.

Memorials to the family for future designation.

As the family tries to find the lost pieces to this difficult puzzle, they would like to share a newspaper article that was recently discovered while searching through documents. It features an interview with an 18 year old Don. They hope reading it will help to heal broken hearts and to begin to find peace, which is exactly what Don would have wanted.

————————–
(Armed Forces provide security). Article date 1982
For 18 yr old Don Gross, a member of the 1982 graduation class at Adel-Desoto Community Schools, a four-year stint in the army has more to offer then just allowing Gross to become a paratrooper. “It provides security and lots of advantages and benefits as far as education is concerned. “ Said Gross. “It’s a learning experience and gives me a few extra years to decide what I really want to do. The thought (of joining the armed forces) has always been in the the back of my mind, but when I looked at the advantages and benefits. It helped me decide.”

Gross said he had three options when he graduated: to go to college, join the armed forces or find a job. “I decided the military and college provided the most security, and in the military. I can do the two things at once-have a job and continue my education. When Gross reports to Fort Bragg. N.C. for basic training he will also begin another type of training-for the U.S. Olympic boxing team, which trains nearby. A Golden Gloves boxer for 3 three years and a participant in Amateur Athletic Union boxing for two years, Gross hopes to qualify for the Olympic Team. Joining the army puts that goal within a more reasonable reach, Gross said.

Gross said he and his classmates have, perhaps, a greater understanding of the state of national and world affairs than did graduates a decade ago. “They’re concerned about the economic situation and tight money problems” he said. “Ten years ago, it seemed like it was somewhat easier. All you hear today is the negative talk about how things are going.”

The Falkland Island crisis is also an issue which has high school graduates concerned, according to Gross. “Graduates worry about being drafted. For those who had their minds set on going to college, it bothers them to think they might have to go to war.”
And, Gross said, concerns about finding gainful employment are ever-present in the minds of 1982 graduates. Gross expects the armed forces to involve just as much, if not more, work than college. He is inclined to agree with his grandparents, John and Tracie Gross, who believe “that a hard day’s work is good for the spirit of man.” “As I have grown up. I have learned that you have to work for what you want and the harder you work, the more satisfaction you will receive.”

“May you rest knowing that
I got you my friend!” 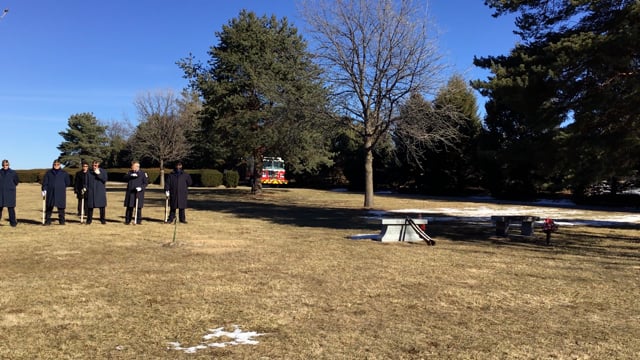 I spent 10 days at the National Fire Academy in Emmitsburg, MD with Don. Over the long weekend, Don and I, along with 2 others traveled to New York City. Don made sure that we did the trip right! His memory will live on with me forever. Rest easy Brother… Had occasion to fly up with former KCMO fire chief, Smokey Dyer, to work with Don a couple years ago and found him to be extremely competent, engaging, and a person who went out of his way to do his job including meeting me at the airport to discuss a house explosion where the client survived for many months before succumbing to her injuries. I know former chief Dyer felt the same as I do – that Don was simply a very nice man and sincerely enjoyed talking with him including a couple of times even after the case had been completed. Condolences to his family.

DG was one of a kind. At a time when it didn’t seem that I had much value he took me happily into his platoon and made useful pilot out of me. He wasn’t everyone’s flavor but he was genuine and cared. When I asked if he’d be a groomsman at my wedding he excitedly, with his trademark smile accepted my request. Rest easy my friend. You’ll be missed… I truly enjoyed working with Don at Building and Safety for the past 6 years. He was a joy! He had a way of always having that silly grin on his face! Always cheerful and never complaining, I’ll miss him so much!

We are heartbroken for Allison and family on Don’s passing. Our deepest sympathies.

I got to teach Don in Science class at Mickle Junior High and then had the pleasure to watch him advance in the Army National Guard as we worked together in the same units over the years. Whenever we had a free moment we would talk about past experiences, how life was treating us and just enjoying each others’ company. Don was a friend to all, mentor, and all around good guy. He will be missed by all who knew him.

To the family of Don Gross, I worked with Don at Station 11 before he left to fly helicopters for the National Guard. He was a fun guy, very personable, and will be remembered always. Please know you are in our thoughts and prayers, God bless you all, Gary and Linda Leyden